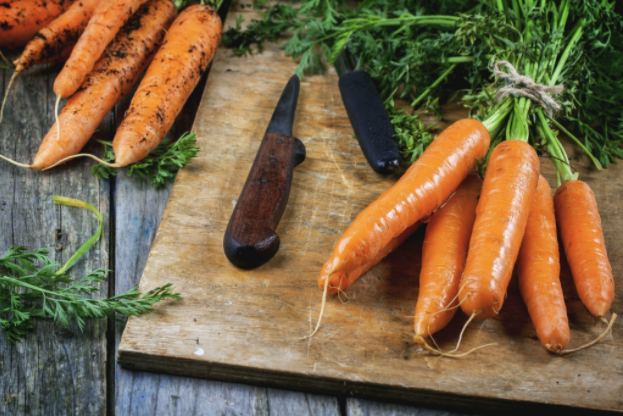 Restaurants are one of the most essential features of American culture and society. There are over 1 million restaurants across the US, and 15.6 million restaurant industry employees. In 2019, United States families spent 51% of their entire food budget at restaurants. Without a doubt, our commercial eating establishments have a lot of influence not only on how we experience and perceive food, but also how we source it, serve it, and waste it.

Food doesn’t have to be thrown away at all. Much of it can be rescued to feed animals, or composted for fuel or soil amendments, or more importantly, to feed people who don’t have enough to eat.  But most restaurants struggle with where to even get started.

That’s where technology can help. Careit is a free food donation marketplace and app, where businesses can donate their surplus edible, prepared, or pre-prepared food to local nonprofits that help the community. Careit is not just limited to restaurants though, it provides an open platform for all food producers to share their abundance with their neighbors. 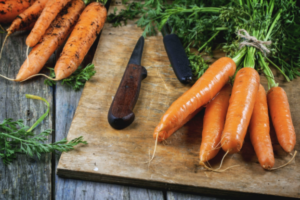 Caterers can also use the Careit app. Chef Jeanette Holly of Los Angeles, CA laments that before there was an app to connect with local nonprofits, she sometimes had to throw perfectly edible food away after an event. Holly described, “A lot of times, especially in catering, we have a lot of overproduction of food. A lot of the time, it goes right into the circular file, which is just upsetting, knowing that so much of this can go and feed the hungry.”

Americans waste a lot. On average, Americans throw away over 1 pound of food per person every day. Right here in the United States we spend over $218 billion growing, processing, transporting, and disposing uneaten food each year. That’s over three times the annual budget for national public education.  Needless to say, we could be a lot more efficient.

Food waste represents the single largest type of waste sent to incinerators and landfills in the US. Ranging anywhere from 14% to 21%, we throw more food away than plastics, or even paper. If food waste were a country, it would be the planet’s 3rd largest emitter of greenhouse gases, just behind the US and China. 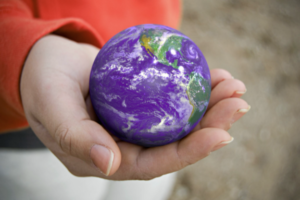 The government is starting to take note of food waste too because of its contribution to Climate Change. When we throw food away into a landfill, it decomposes without oxygen into greenhouse gases like methane, which can and does escape into the atmosphere.Methane in the atmosphere traps heat, and is over 25 times worse than carbon dioxide at contributing to global warming.  So every time we throw food into the trash, it gets converted into a giant heating blanket on the planet.

Not only that, the food we grow takes a lot of resources such as water, fertilizer, soil, and oil for transportation.  When we throw food away, we’re also throwing away everything that it took to grow and transport that food. In fact, food waste accounts for about 20% of the entire water usage in California.  And food is wasted all along the food chain.  From farms, to packaging and manufacturing, to retail and restaurants, and then all the way down into individual homes.

A study by the University of Arizona says that about 9.55% of the food purchased in fast-food restaurants is wasted, and 11.3% in restaurants with full service.

Food scraps make up 66% of restaurants’ trash, compared to 52% at fast food places. And as much as 95% of a restaurant’s total waste could be recycled, donated, or composted.  Think about what that means in terms of the number of bags you see going directly to the garbage, and number of bags going to recycling or other.  Most of us can do a LOT better.

So if we shouldn’t just throw food away, what should we do with it?  The answer to this problem is addressed in the EPA’s food recovery hierarchy. 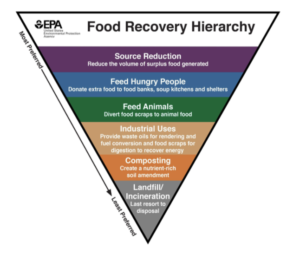 Here at the top of the pyramid we can see that the most important way to get rid of food waste is to stop it at the source.  Through careful planning and purchasing, the amount of food saved at a restaurant can start with the amount of food never even purchased.

The next most important thing to do with surplus food is to use it to feed people.  Restaurants always want to serve the freshest ingredients, but just because it’s not worth selling doesn’t mean it’s not worth eating.  Feeding staff or feeding the local community of hungry people is a perfect way to reduce food waste and to give back.

You might have heard rumors that a restaurant can’t donate food because it’s a liability and someone might sue.  But that couldn’t be further than the truth. In 1996 the Bill Emerson Good Samaritan Act was signed into law to protect food donors from liability, making it legal to safely donate food so long as it’s donated in “good faith” that it is safe to eat. Now, local Health Departments oversee guidelines on safe food donations for restaurants to maintain safe temperature and minimize exposure to potential dangers.

With the right guidance, buy-in, and partners, restaurants can make a huge dent in their food waste. If you’re interested in learning more about how to set up a zero-food-waste commercial kitchen, please contact Careit at hello@careitapp.com.

Fill in the form below and we will contact you. We will answer all inquiries as soon as possible.
hello@careitapp.com